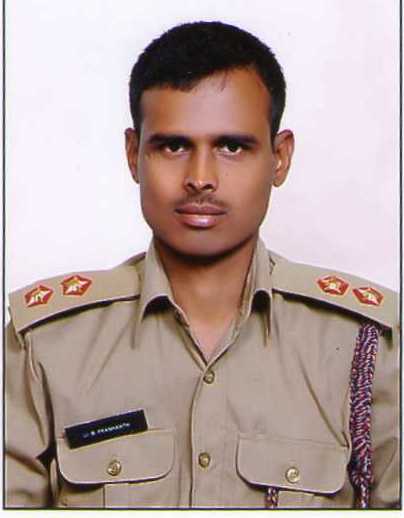 National Cadet Corps at Vaagdevi College of Engineering was raised in the month of November 2010 under the affiliation of 1(A) Compo(Tech) Regt NCC, Warangal Group. Now it is known as 1(T) Compo (Tech) Regt NCC with a strength of 100 cadets (Company). All the Boys and Girls of B.Tech I year and II Year of our autonomous college in Warangal can enroll if they possess the required eligibility criteria specified in the NCC Act. The cadets joined into NCC are required to follow the rules and regulations specified in the NCC Act. The boy cadets are enrolled into Senior Division (SD) and the girl cadets enrolled into Senior Wing (SW). In the year 2010, Vaagdevi College of Engineering enrolled cadets into SD only, from 2011 onwards we are enrolling the cadets into both SD & SW. NCC imparts the military training to cadets through which the students get the awareness about the forces. The training will be conducted in two ways viz., Institutional training & Camp training. Our engineering & pg college in Warangal is conducting NCC activities very successfully by encouraging the cadets to take part in the uniform services and other government services to serve the society directly or indirectly. Our VCE college cadets received the best cadet awards and scholarships at the Directorate and Group level and had representation to prestigious Republic Day Camp also.

The ‘Aims’ of the NCC laid out in 1988 have stood the test of time and continue to meet the requirements expected of it in the current socio–economic scenario of the country. The NCC aims at developing character, comradeship, discipline, and a secular outlook, the spirit of adventure and ideals of selfless service amongst young citizens. Further, it aims at creating a pool of organized, trained and motivated youth with leadership qualities in all walks of life, who will serve the Nation regardless of which career they choose. Needless to say, the NCC also provides an environment conducive to motivating young Indians to join the armed forces.

1. To Create a Human Resource of Organized, Trained and Motivated Youth, To Provide Leadership in all Walks of life and be Always Available for the Service of the Nation.

2. To Provide a Suitable Environment to Motivate the Youth to Take Up a Career in the Armed Forces.

3. To Develop Character, Comradeship, Discipline, Leadership, Secular Outlook, Spirit of Adventure, and Ideals of Selfless Service amongst the Youth of the Country.

The NCC is a responsive, learning and continuously evolving organization. Its activity is guided by certain core values that we endeavour to instill among all ranks of the NCC. These include the following:

(a) A sense of patriotic commitment to encourage cadets to contribute to national development.

(b) Respect for diversities in religion, language, culture, ethnicity, life style and habitat to instill a sense of National unity and social cohesion.

(c) Abiding commitment to learn and adhere to the norms and values enshrined in the Indian Constitution.

(d) Understanding the value of a just and impartial exercise of authority.

(e) Ability to participate in community development and other social programme.

(f) A healthy life style free of substance abuse and other unhealthy practices.

(g) Sensitivity to the needs of poor and socially disadvantaged fellow citizens.

(i) Understanding the values of honesty, truthfulness, self-sacrifice, perseverance and hard work.

(k) Respect for knowledge, wisdom and the power of ideas.

WE THE CADET OF THE NATIONAL CADET CORPS,
DO SOLOEMNLY PLEDGE THAT WE SHALL ALWAYS UPHOLD THE UNITY OF INDIA.
WE RESOLVE TO BE DISCIPLINED AND RESPONSIBLE CITIZEN OF OUR NATION.
WE SHALL UNDERTAKE POSITIVE COMMUNITY SERVICE IN THE SPIRIT OF SELFLESSNESS AND CONCERN FOR OUR FELLOW BEINGS. 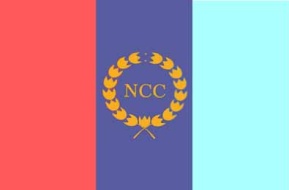 The NCC flag for various units of the NCC was first introduced in 1951. The flag was of same pattern, colour and size as was used by various regiments of the Army. The only difference was that it had the NCC badge and unit designation placed in the centre. Later on it was felt that the flag should be in keeping with the inter-service character of the Corps. In 1954 the existing tricolour flag was introduced. The three colours in the flag depict the three services of the Corps, red for the Army, deep blue for the Navy and light blue for the Air Force. The letters NCC and the NCC crest in gold in the middle of the flag encircled by a wreath of lotus, give the flag a colourful look and a distinct identity.>